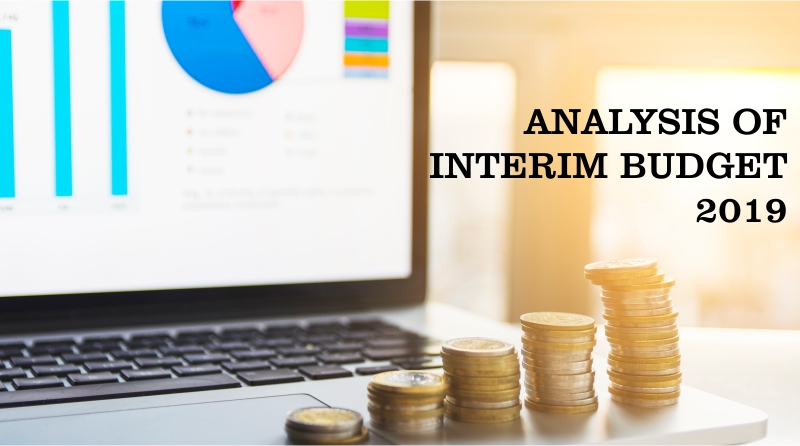 The Finance Minister presented the Interim budget of 2019. The motive of this budget was to attract the Lower income group before the high voltage finale i.e. General elections 2019 that are going to be held this summer. Through this budget, the Current Government tried to repeat the results of the General Elections.

The major highlights include Tax exemption of 5L in the income tax, 6k per year to the small and marginal farmers holding land up to 5 acres. Several deductions have been raised to benefit the low and medium-income groups having income up to 9Lacs. The basic idea behind this is to recreate an image of the Current Government in the minds of people before General Elections 2019. This article is an effort of comparison between the previous year budget and the current year budget.

The current year budget is proposed to give a vision for the next 10 years. The main focus of the budget is to maximize the benefit to the low and medium-income groups of people and farmers of the country. Keeping the General elections in mind Central Government proposed benefits in terms of tax rebate in the income tax slab, some exemptions also being proposed to increase and providing several other benefits to the different sections of the society.

In the previous union budget, 2018-19 presented the income tax rates were revised from 10% for 2.5L to 5L income to 5% but making it talk amongst each and every individual the finance ministry has proposed for tax exemption up to 5L. This will benefit more than 3 crore taxpayers of the country.

Another masterstroke by central Government is to provide 6k to every small and marginal farmer which will be disbursed in 3 equal installments of 2K each of which the first installment will be credited before 31st March.

Previous Budget focused on making India a digital country as 3073 cr was allocated for digital India scheme as compared to current Interim Budget which focuses on employment generation in the coming years to come as this has been the major concern for the government in the recent times. The Idea was to Improve the image in the minds of the unemployed youngsters so that they can stabilize their position on the employment front.

This time total budget accounted for Rs 27 lakh crore out of which interest payment accounted for the largest portion at 24%, Defense is the second-highest category followed by Subsidies which accounted for 10 to 11% percent each. Agriculture accounted for 5.32% as compared to 3.52%. This rise in expenditure can be due to income support to farmers owning cultivable land.

In this Budget, there is been a lot more for the entertainment industry as government has proposed for single-window clearance to the Indian filmmakers and as well as ease of regulations for shooting films in the various parts of the country as they want to convey that this government is for everyone not just for the lower and middle-income group.